It was another early morning shoot for me on Tuesday. I'm still staying off the high fells for the time being and this is giving me opportunity to visit some locations which I haven't photographed for some time. I decided to head to Elterwater, which is in the Southern Lake District and is situated at the head of the Langdale Valley. It's only around 35 minutes drive from home and I'm ashamed to say that its a location I've somewhat neglected over the years. It's not because I don't like the views, far from it, its a lovely little place, however, it will always play second fiddle to the River Brathay. The river feeds from Elterwater and I have to walk along the river to get to there. I simply can't resist the irresistible charms of the Brathay, I'm powerless against her beauty and as a result, Elterwater doesn't get a look in. I was looking through my images and it was glaringly obvious that I have very little in the way of images of this particular location opposed to the three million I have of the Brathay. Infact its proabably been a good two years since my last shoot and that was only my second time. So I decided on Tuesday to make amens and pay it a visit and resist the mistress that is the River Brathay and give Elterwater some much needed loving.

After my mad dash, gorgeous light and reflections at Elterwater: 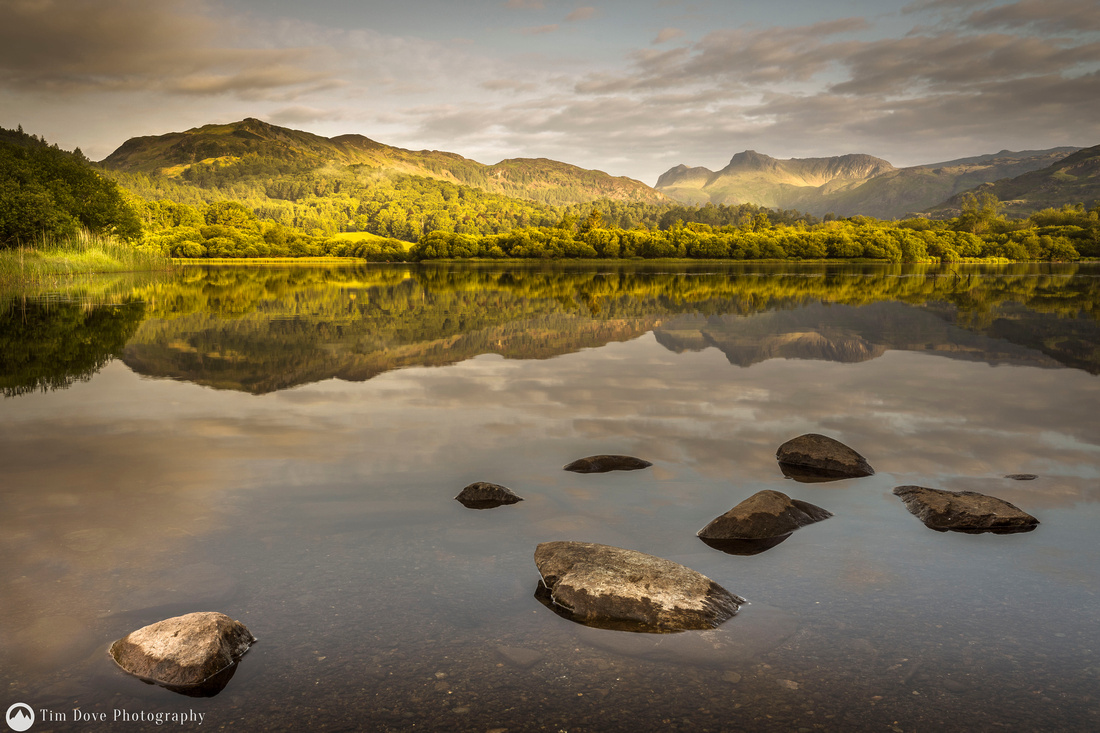 The weather wasn't looking particularly amazing but it was forecast for a bit of sun amidts the cloud and general dull at around 5-6am. This was enough inspiratation for me to haul myself out of my pit at 3am in the morning. On leaving the house and pointing my head in an upward direction, I noticed that it wasn't wall to wall cloud and there was indeed some clear skies above, so that was positive for some light. On the drive over and rocking some serious early morning radio bangers, it was looking like there was a large bank of cloud on the horizon and that was probably going to obscure the really intense first light, but I may get some colour in the sky, not ideal but certainly not a disaster. I arrived at the Skelwith Bridge, whacked the wellies on and off I trotted. My resolve was serverly tested with a touch of delicate lingering mist around the Brathay, but I pressed on, sorry my love not today. I arrived at Elterwater and it was flat calm with not a breathe of wind, there was also a touch of mist, but I couldn't see this lasting long. The water levels are extremely low at the moment after all the amazing lockdown weather, so this opened up my options for a composition with plenty of shoreline rocks to use as foreground. So I played around with a few compositions and eventually decided on a wider shot with some rocks leading from the left all the way to the Langdale Pikes as my background. Now it was just a matter of waiting for the light or lack of.

A slightly wider shot of Elterwater with a different composition using the rocks to lead the eye into the scene: 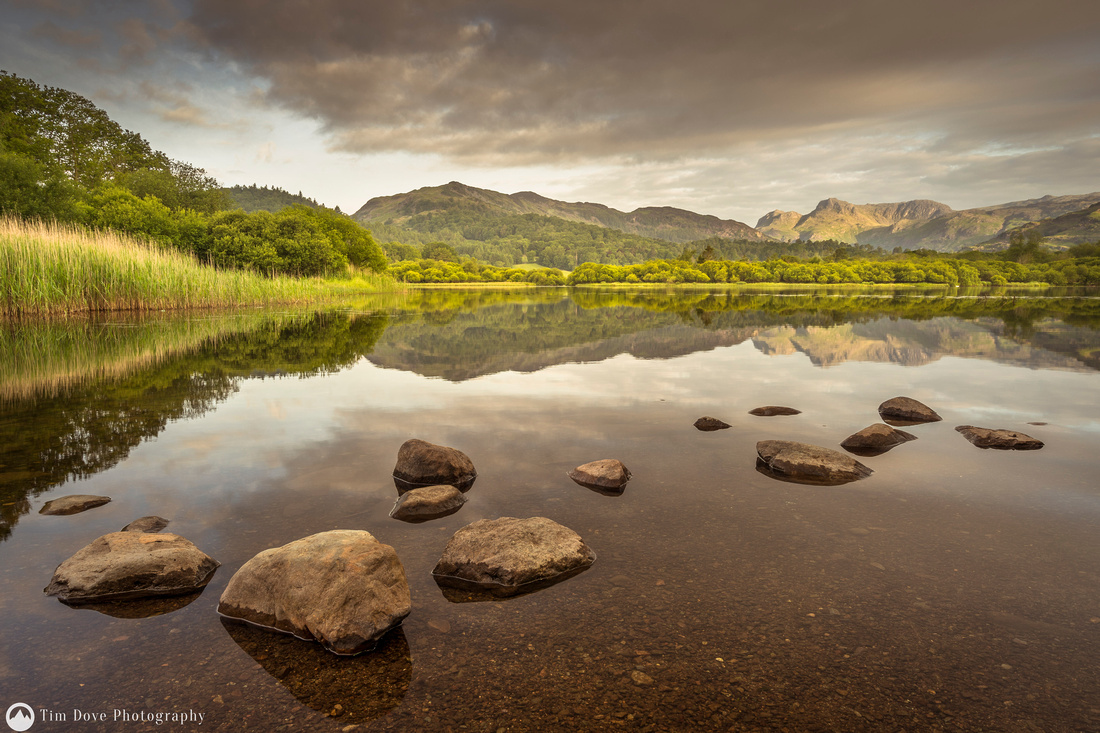 Well I waited and waited and the colour never really came. I waited some more and the intense light never came either, infact it was getting flatter and duller by the minute. I kept going for a wander to check to see if there was light hitting any of the higher fells, but not a sausage. It really was looking like I would be heading home empty handed. While stood watching and getting a little chilly I saw someting swimming across from the farside of the water and thought it was a canadian goose come to ruin any reflections, they like to do this to photographers. The goose seemed to have dissapeared which was odd, then Suddenly a little furry face popped out of the water, it was an otter. I quickly reached for my telephoto lens and tried to swap from my wide angle in order to get a shot. The little fella was diving, splashing and lolloping around infront of me in the water but as soon as I put on the long lens, splash......gone......it was obviously just toying with me. With another shot opportunity missed and no sign of any light I decided to call it a day. I packed up all my gear and started to make the walk back to the car along the Brathay feeling a little deflated.

My final shot of the day, some lovely light on the Langdale Pikes, with the cloud rolling in behind: 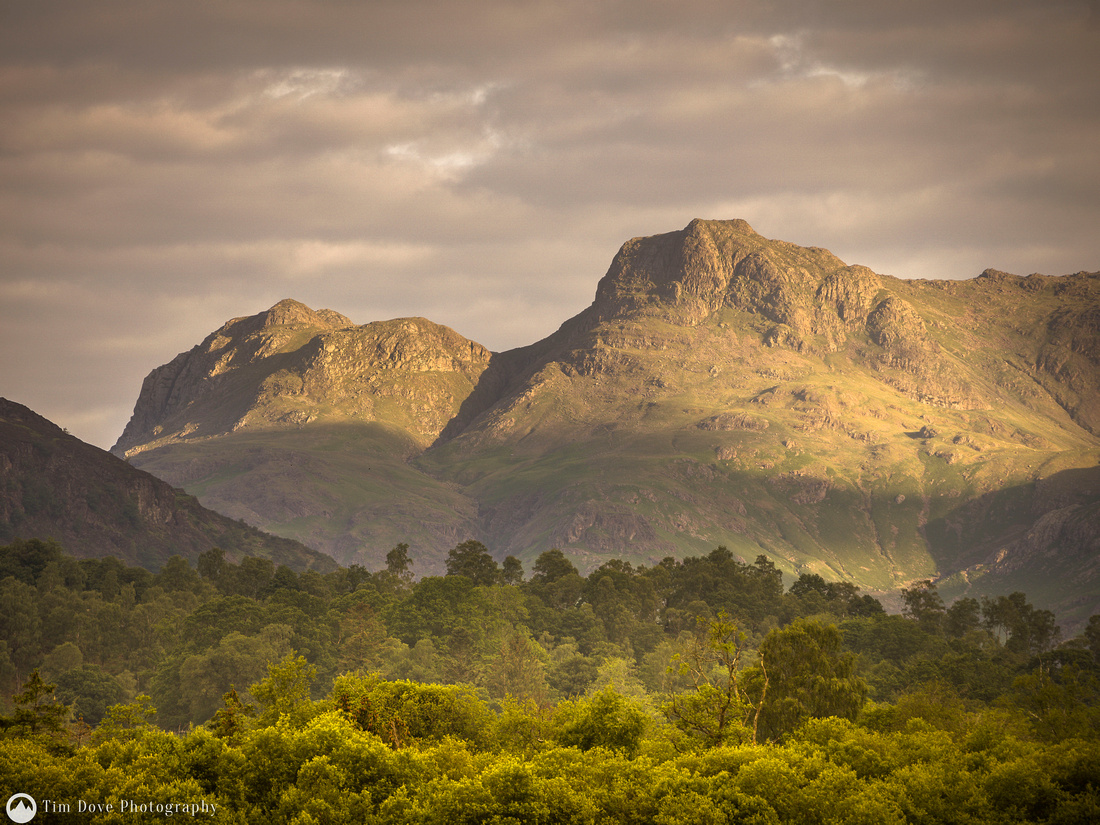 While strolling back I noticed that there was a small slither of light developing on Wetherlam. I could not believe it 'your having a laugh'. The slither grew bigger and bigger and soon said slither was a splash and then a great big dollop of lovely light on the fells, Oh bugger!! The light was start to spread across the high fells and wouldn't be long before it hit the Pikes. So I had to make a dash for it back to Elterwater....in my wellies....which isn't particularly easy or comfortable. As I got closer to Elterwater the light was now hitting the Pikes, Lingmoor fell and the bank of trees across the water, it was looking gorgeous....come on little legs, don’t fail me now. I unpacked my gear in a wild sweaty panic, but the light went....NOOOOOOOOO!!!! I still set up and prayed that the light would come back again. Well I think Mother Nature took huge pity on this sorry excuse for a landscape photographer and the light came back.....thank the lord!! I grabbed a couple of images before the wind picked up and all reflections were gone. Wow how relieved was I?? It was a major lesson that if you turn your leave to early you can miss out as a scene and weather can change in an instant. I was lucky this time that I was in running distance of my location and still able grab a shot albeit a bit of a rush. Its always worth hanging around for that extra time, as you never know what you are going to be presented with. In Landscape photography patience definitely plays an important role and is a key asset you need.....one I was certainly lacking on this occassion.

essay writers(non-registered)
I’ll be waiting for the future blog updates and these would be wise as well. I’m sure you are having the amazing skills in photography which attract us a lot. Please do share the images here I’ll be waiting.
Daniel Tolman(non-registered)
eautifu
No comments posted.
Loading...
Subscribe
RSS
Recent Posts
Shooting Outside of Golden Hour Winters Final Hoorah? The Importance of understanding Light and How I use it in my photography NEWS: January Sale - 20% off ALL Prints Tim Dove Photography - Business Review 2021 My Favourite 10 Images of 2021 The First Snow of the Winter Arrives The Day that Saved Autumn NEWS: 12% OFF ALL PRINTS DURING OCTOBER Landscape Photography can be so FRUSTRATING!!!!!
Keywords
lake district photography Landscape prints Lake District Photography Lake District Snow mounted Autumn
Archive
January February March April May June July August September October November December
© Tim Dove Photography - Lake District Photography
User Agreement
Cancel
Continue