I'm going to start taking some of my favourite images and running through how I captured them and also how I bring them to life in post processing. Hopefully this will give you a little insight to my thought processes involved with making these images. The first image I'm going to look at is a recent picture of the Boathouse at Rydal Water taken on a lovely misty morning.

Having been a couple of times before I knew the type of image I was looking to capture. The main elements in the scene are the island and the boathouse and I wanted to catch the morning sun on the trees and island. In terms of composition, I wanted to place the island on the left and to occupy the majority of the left side of the frame, this would be the focal point to my image. The boathouse would play second fiddle and offer a little bit of balance on the right hand side. Critically I really needed the mist to stay in the background but not so to obscure the island and boathouse, as the mist would create seperation between the island and the background and help it to really stand out. The mist also helps to eliminate any distractions and simplify the image. It was also important to retain the reflections in the scene, which would further create balance and a sense of calm, which I really wanted to convey.

Nothing to see here: My view on arrival at Rydal Boathouse 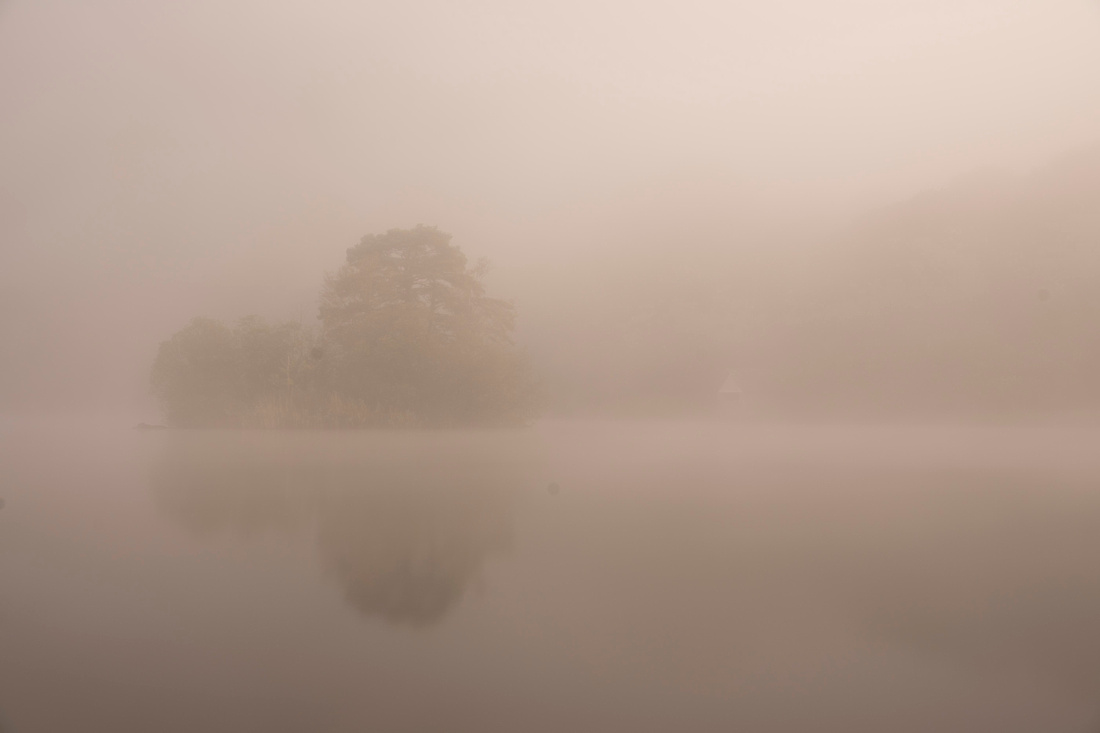 In terms of my settings, I had the camera set up on a tripod to keep it perfectly still. I used my 24-70mm lens and a focal length of around 57mm, this meant I could get close to the island and boathouse but also have a little space around these elements to let them breath. I shot in full manual mode and in RAW, so I can have full control over processing my image later in Adobe Lightroom. My ISO was set at 100, which is the lowest for the camera. I was shooting on a tripod so I didn't have to worry about shutter speed and camera shake. Keeping it low allows me to get the best image quality possible. I used an aperture of f8 as there was no foreground and with it being misty I didn't have to worry about the background and how sharp that needed to be. Selecting f8 meant I was shooting with the lens at its optimum sharpness to get the best quality image. I used a polarising filter to cut out the glare on the water and also add a bit of pop to the colours. Once I had set up all my settings, I then looked to where to focus. The main focal point to my image was the island, so this was my point of focus. I manually focused on the trees at the top section of the island. I then took a tester shot to make sure the scene was sharp and well exposed. With mist, the camera can get a little confused when evaluating the scene as there is so much white and it can make the camera think it needs to under expose the image, so I used my exposure compensation to increase the exposure +1.0 EV. This brightened the scene and looked more like I saw it. I was now all set up and ready to take my shot, It was now just a waiting game for the light and the mist to play ball.  After around an hour of waiting the sun started to light up the trees on the island and the mist had cleared enough to to get good seperation and also to have the boathouse visable.

First shot: This is an unedited RAW file straight out of camera. Really pleased with the overall image and balance, however I was not happy with the ripples in the water. 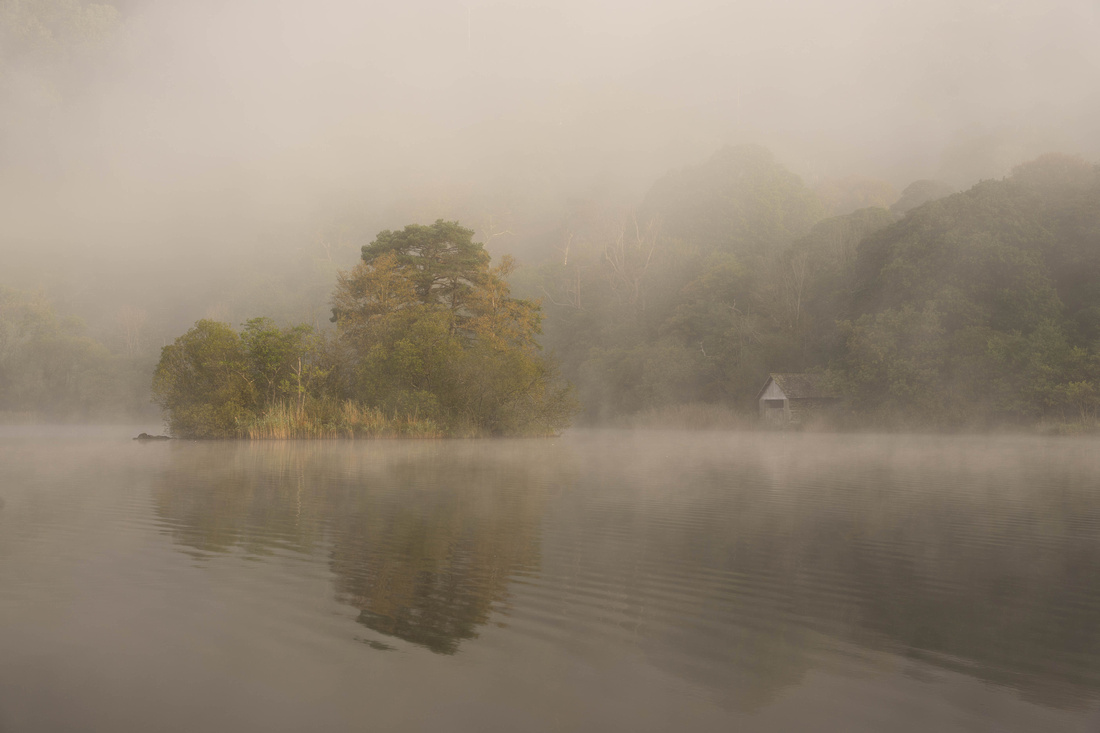 After reviewing the image it was clear the water was a little choppy, so I decided to use a couple of neutral density filters to flatten the ripples in the water. I used my 6 stop ND filter and a 0.9 medium ND graduated filter to slow my shutter speed. My original shutter speed was around 1/20th of a second, the combination of the three filters increased my exposure to 8 seconds, which was enough to smooth the water and retain some of the reflections. So I took my shot with the ND filters. Because the filters block the amount of light hitting your sensor, you need to focus your camera before you put the filters on, as it can be difficult to find your focus as the image will be darker, on occasions like this it is better to manually focus because auto focus can struggle due to the lack of light. I also used a 2 second timer, so to reduce the camera movement. I reviewed the new image and I was really pleased with the effect the filter had on the water, it also looked calmer and added a nice ethereal look. I checked the image for sharpness and made sure I was happy. This was exactly the image I was after and from first inspections I was very pleased, we would have to wait and see how it looked on the big screen, but I was hopeful I had my shot.

TAKE 2: The shot using the ND filters to slow the shutter speed enough to flatten the ripples on the water. Un edited RAW file straight out of the camera. 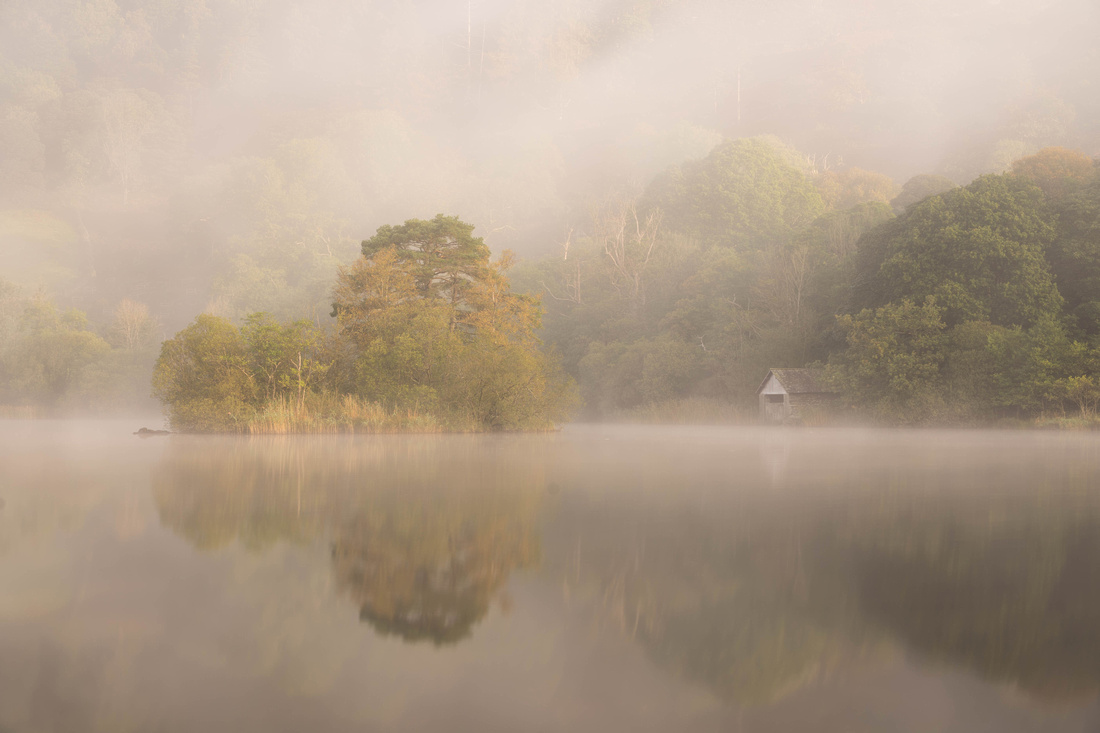 Once I'd got home and reviewed the image on the computer, I was really pleased with the file and was ready to edit the RAW file and really bring out all the lovely details the sensor recorded. RAW files always come out of camera very flat looking and we need to use software to bring out the best of the file. I edited this image in Adoble Lightroom and overall this was an easy image to edit and I really didn't need to do too much, as I had already got a good base to work from, having got as much right in camera as possible.

I firstly I applied lens and chromatic aberation corrections before removing any visable dust spots. I then move on to make my global adjustments, these are adjustments to the whole image. I dropped my exposure, because it was on the brighter side. I then added a little contrast, increased the highlights and shadows, to bring out the detail in the darker areas. Increased the whites slighty, added a touch of vibrance and increased the lights on the tone curve.

Global Adjustments: This is my partially edited image, I've made all my global adjustements before moving on to toning the image and local adjustments. 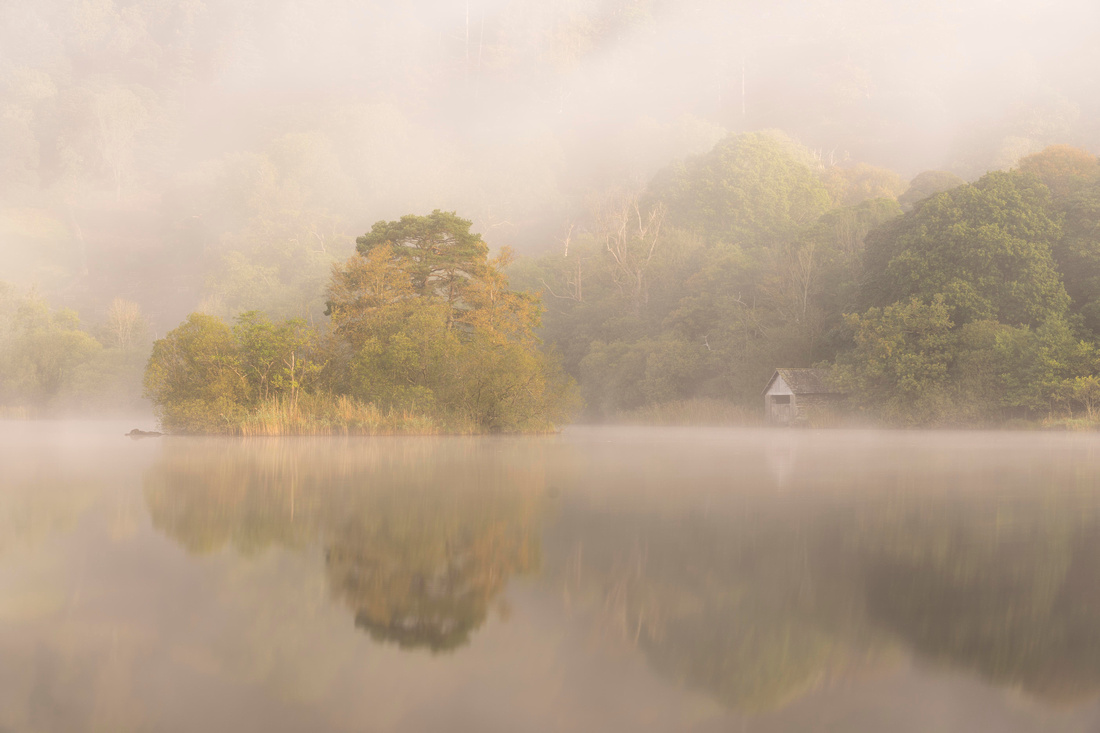 The next job was to look at the toning of the image. I wanted the image to be a little warmer than it had turned out, as I remember the warmth of the sun as it broke through the mists and wanted the image to reflect this. I didn't want to increase the over all warmth of the image, just the island and trees, with the mist to still remain a touch cooler. So I decided to split tone the image, this simply means you apply different tones to the shadows and highlights, so instead of having one tone to your image you have two. The image was very much like this anyway, with the warmer colours in the trees and the cooler colours of the mists. The split tone just allowed me bring out the colours. The changes are very subtle and don't move to far away from the original image.

After split toning, I then moved on to the HSL panel, were we can adjust the hue, saturation and luminance of individual colours. I mostly focused on the warmer colours and gave the orange and yellows a little boost in saturation and hue, so they popped a little more. Once I was happy with the overall colours in the image I then had a couple of local adjustments to do. When I used the long exposure, I gained the reflections but I did lose a little of the density and texture of the mist and I wanted to use a radial filter to re introduce this by using the dehaze tool. You can use this tool to enhance a misty seen as it reduces the detail if you decrease it and gives the feel of mist, use it very sparingly mind you. You can also use it the opposite way to increase the detail some times lost in misty scenes. I also warmed up this area further as I still felt that around the island wasn't as warm as it was on the day, which the ND filter seemed to reduce. The area in red is the area where I applied the alterations. The radial filter is a great tool and can help to make adjustments in specific areas of the image without altering the whole image.

Adding the adjustments through radial filters:

Having added the decrease in dehaze, I then had to do the reverse on the island as it didn't really have too much mist around it and didn't want to lose the details in the trees, the mist was more around the boathouse. So I increased the dehaze on the island area to retain the details. I then increased the exposure of the trees on the right, added a vignette and finally sharpened the image and hey presto, the finished article. What do you think? 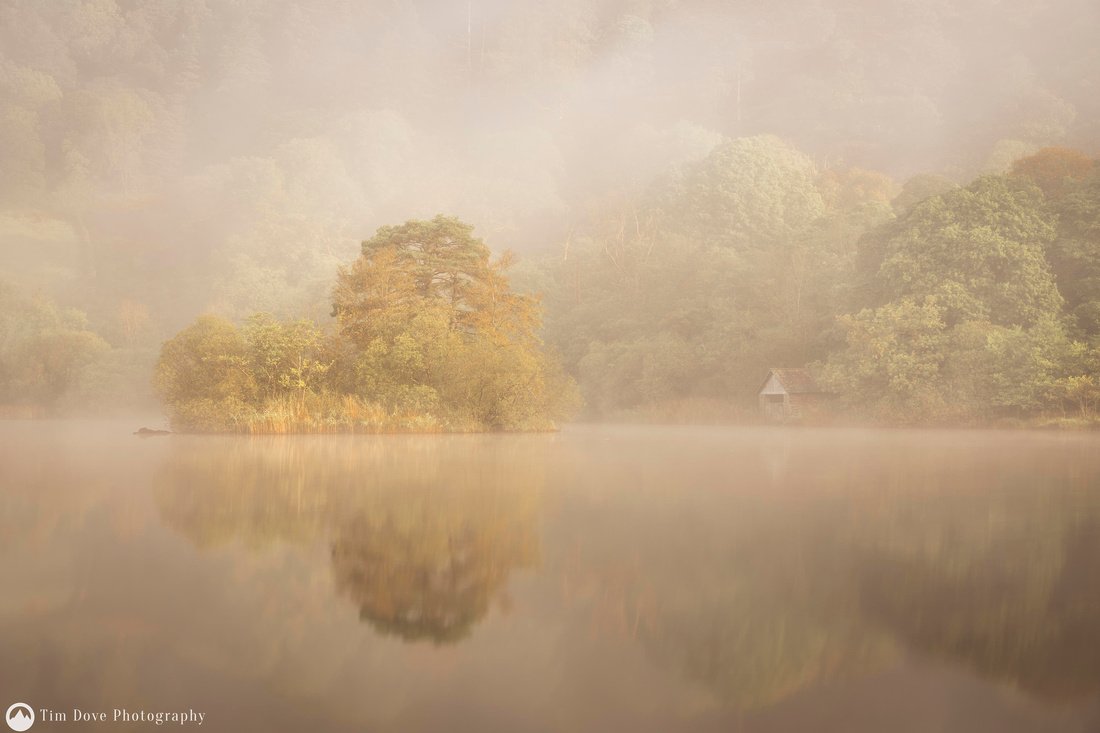 I hope you found this interesting and it has given you some insight on how I approach taking my images and the processing techniques I use to really bring the images to life. I will do a few more images over the next few months.