Lake District photography - How I approach photographing a classic location

You will be hard pressed to find a location in the Lake District which hasn’t been photographed before. There are many ‘classic’ locations which are visited by many photographers each year. I’ve written a previous blog about finding originality in photography and how It can be achieved. However there is no doubting it can be difficult when a scene is well photographed. Instead of being put off by shooting these popular locations, I find it a creative challenge to try and put my own mark on it. We can creatively affect a scene in a number of ways by using our own compositional interpretation and our editing style. You could have 10 photographers photographing the same scene but all would look and feel different and as we would interpret it and edit it in different ways. I was faced with this scenario a few weeks ago when visiting, potentially, one of the most popular locations currently in the Lakes, the secret mill in Borrowdale. In this blog I’m going to discuss how I approached shooting this iconic location.

The Secret Mill in Borrowdale: This is the classic landscape shot of the Mill, shooting nice and wide to get the whole scene in. I really wanted to attempt something a little different from this. 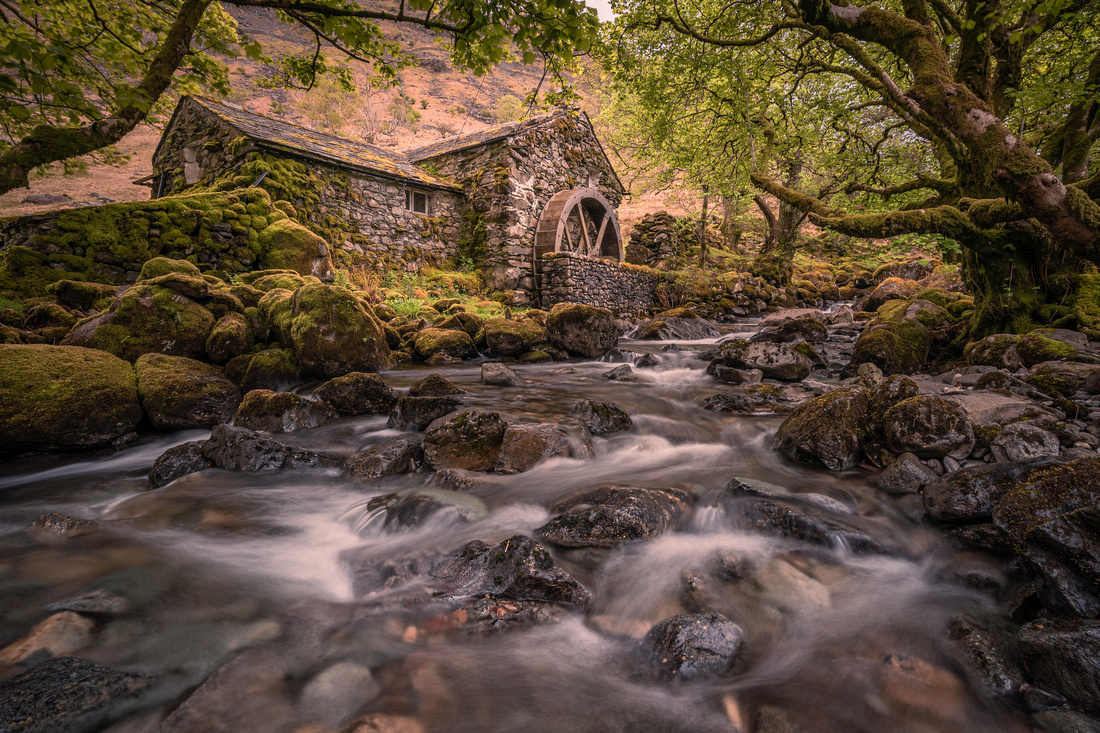 The secret Mill sits in between Seatoller and Rosthwaite in the Borrowdale Valley. It has become a really popular location over the last 2-3 years, for very good reason, as its absolutely stunning and pretty unique. Due to this, it is very difficult to get an original image. So how do I approach shooting such a popular location? Firstly I tend to not look to much at other photographers images of the place I'm visiting, as I don’t want to be too influenced by other photographer’s work. I like to approach the scene with fresh eyes and not have to many preconceptions. I will then go on to do a little research on the location and look at the best time of day to shoot it, for example in the afternoon the light would hit the fell behind, which may distract the eye from the overall scene. I also chose a day when I believed the weather conditions would best suit the location, over cast days are good for waterfalls as you don't too much glare on the water from the sun. Another weather consideration and most critical for me was the amount of water in the beck, as this was going to be a major feature within my image, for me the shot really doesn't work without. So I made sure I would visit after heavy rain fall. Time of year also played a part as I wanted to visit when there was an appropriate amount of foliage on the trees that surround the mill, to add some vibrance and colour. In the winter months, without the leaves on the trees, the scene would look a little barren. As we have no major light in the scene it is important to have a variety of textures and colours within the image to make it more appealing to the eye. These are all thinks I considered before getting on site.

My first pass: This was my first attempt at portrait orientation image, I do like it but I didn't feel it really maximised the best of the waterfalls. 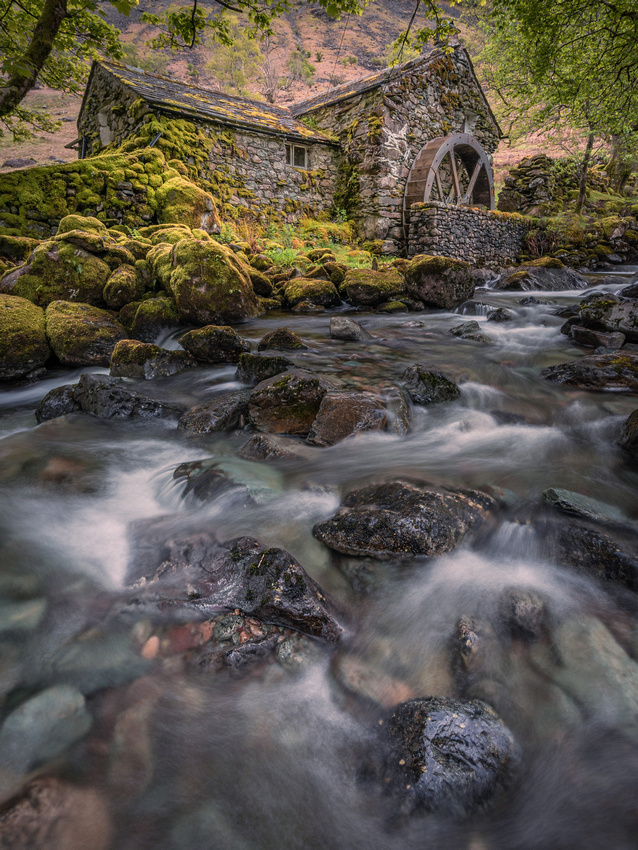 How I captured and composed my final image on location:

I didn’t need to use too much equipment to capture the shot, however the most important aspect was the choice of lens. You are relatively close to the mill, so In my opinion a wider field of view was essential, so I used my 16-35mm wide angle lens to achieve this. I like to incorporate a lot of foreground in my waterfall shots, as I believe it helps to create the flow and depth, so the wider lens was the natural choice to incorporate my foreground and the mill. I used my tripod as I was going to use a longer exposure time to add movement to the water, so the camera needed to be perfectly still. A polarizing filter was used to take the glare off the water and wet rocks. I didn’t require any other neutral density filters as the location was dark enough to achieve the shutter speed I required. All very simple in terms of gear.

In terms of composition, I was favouring portrait orientation to maximise my foreground and emphasize the flowing water in the beck but still have the mill prominent in my image. I positioned the waterfall so it took up the majority of the bottom half of the frame and flowed in from my right to the bottom left. I liked how this created depth and caught the flow the beck. I also positioned the moss covered rocks from the biggest up and again this adds colour, texture and leads your eye up to the mill. The foreground rocks helped to frame the image, add interest and texture, the darkness of the rocks contrasted nicely with the white water. The mill was placed on the upper third with the foliage at the top to frame the image once more.  The only issue I had was the large branch which intersects the mill. It’s usually good practise to keep distracting elements to a minimum, however, on this occasion it simply wasn’t possible eliminate the branch completely. There is always a play off but I feel this was the best composition and its definitely worth the compromise. 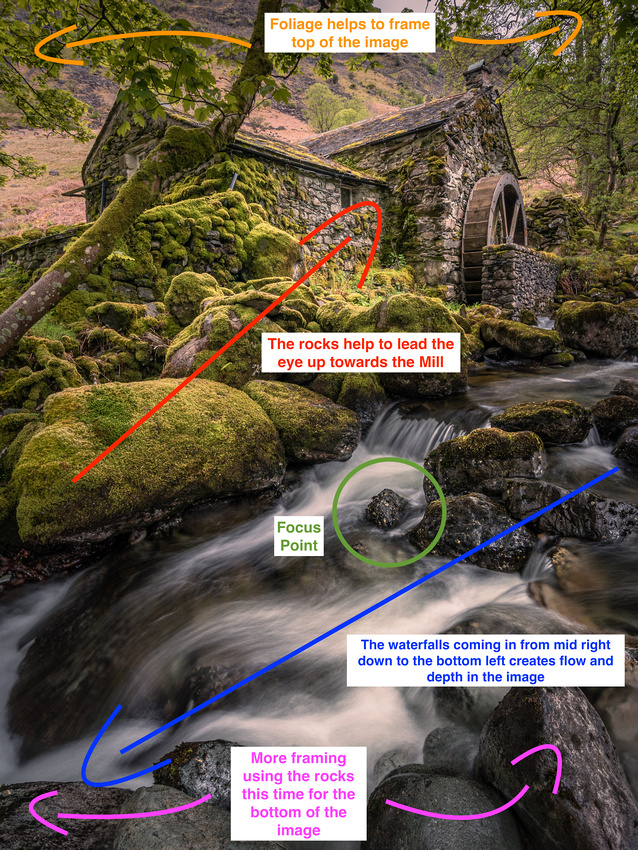 I shot the image in manual mode and my settings were ISO 100, an aperture of f11 with my shutter speed being around 2 seconds. I used a 2 second timer so the camera was perfectly still and free from camera shake. I had to under expose my image slightly in order to reduce the shutter speed to capture the movement and have the water retained its detail, I didn’t want the water to appear too milky, as you do loose the fine detail at longer shutter speeds. My focal length was around 17mm and I roughly focused 2/3rds of the way into the scene. I manually focused on this particular occasion as I had plenty of time to work with. The focal length and aperture were enough for front to back sharpness across the frame, I didn't need to focus stack despite the rocks being very close to the camera. I shot the image in RAW format and edited it in Adobe Lightroom.

The Final Image: I'm really happy how the image turned out and I think its a good take on a classic. 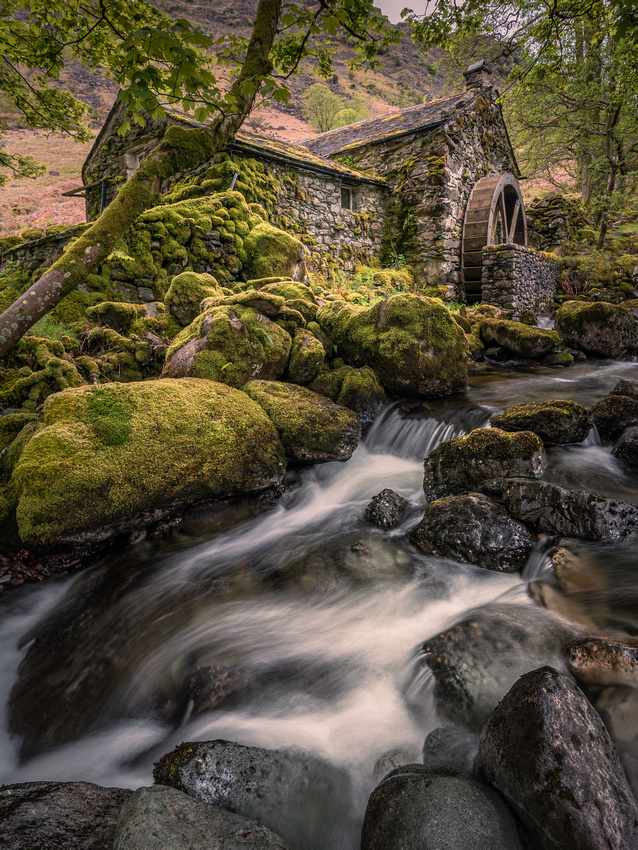 I hope you found this blog interesting. It is always a challenge to photograph a well shot location, however it can be done. Approaching the location with an open mind and fresh eyes can really help and don't be afraid to try something a little different. Take your time and really get to grips with the location and use your time to think about your composition. Trying different angles, points of view, orientations and focal lengths can all help in finding something a little different and putting your stamp on it. So don't be put off by shooting the classics and embrace it and get those creative juices flowing.