I don't think its been a vintage winter, well not from my point of view anyway. Ok, don't get me wrong, I've experienced some joy but not nearly as much as I would have liked. The really great conditions have been fleeting at best and usually have fallen when I'm stuck at work. Sadly for me I don't have the flexibility to drop everything and get out with my camera when the conditions present themselves. So I'm relying on a huge slice of luck and all the elements aligning perfectly on either a Saturday and Sunday........which rarely happens in my experience. In all honest I'd completely given up this year with temperatures topping 16 degrees a few weeks ago. In fact I'd even contemplated dusting off the old shorts and putting the winter jacket away for the year.  Winter couldn't have been further from my mind, especially with the promise of spring around the corner. However Mother nature had other ideas and had a little treat in store with a cold snap which promised some of the good old white stuff. Would my luck be in and would I catch some amazing winter conditions on what surely would be winters final hoorah. 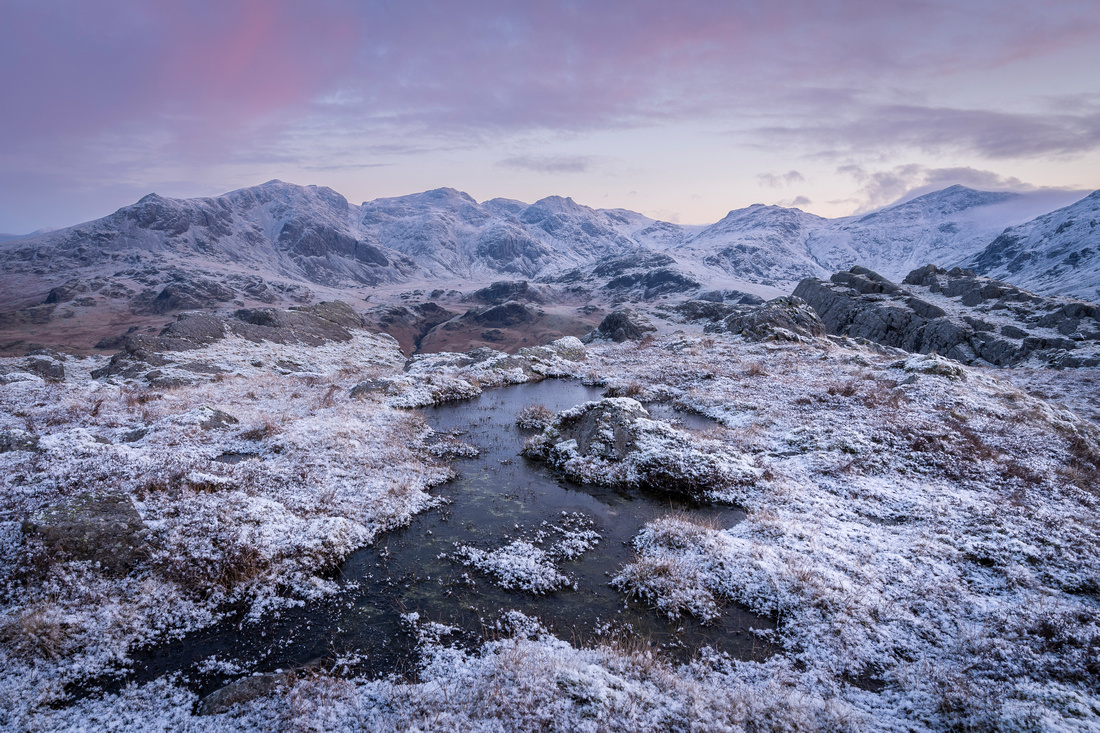 Hardknott Fell Frozen DawnI certainly wasn't expecting these conditions in early April considering it was topping 16 degrees a week or so ago. However winter was definitely back this weekend. An image taken from the awesome Hardknott Fell looking towards the impressive wall that is the Scafell massif at the head of Upper Eskdale. A fine view normally but with a covering of snow it looks beyond epic.

I had braced myself for the inevitable snow in the week when I would be working and I wasn't far from the mark with a good dump of snow on Wednesday/Thursday. I watched rather miserably as the plethora of bragging Instragram stories about how wonderful the conditions were and 'WHAT A MORNING' posts. I'm sure they are not intended that way but sometimes it really feels like it, especially when your trapped in the office with more chance of going on a date with Kim Kardashian that getting out with the camera. As we crept nearer the weekend the snow receded quicker than my hairline and I'd given up hope of playing in the snow. However I made my usual plans to head out on Saturday morning and I decided to pick a location which would maximise any potential of snow in pure desperation. So I picked Hardknott Fell which has the most wonderful view of the Scafell massif, if anywhere would have snow surely the tallest mountain range in England would? Snow or not, its a wonderful location and i've definitely got unfinished business from this particular location. 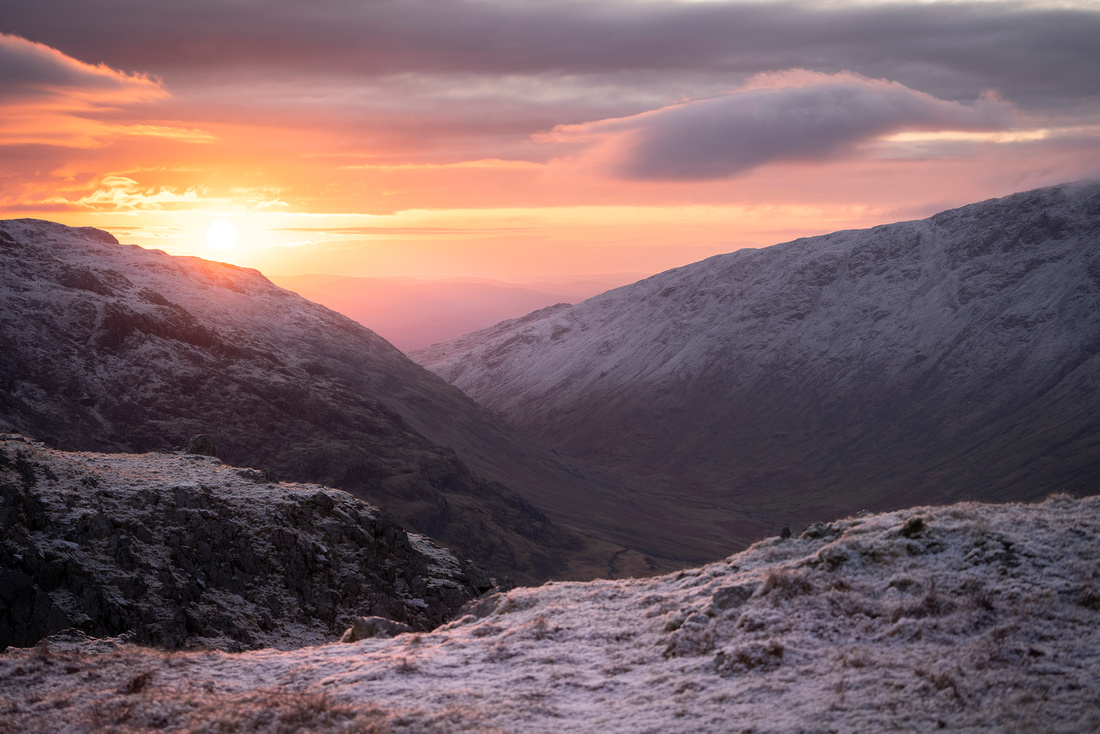 I made my way into the heart of the Lake Districts Wild West, Upper Eskdale, a rugged and remote landscape. On the journey there was no real indication there would be snow on the higher fells. I reached Hardknott Pass and the road looked passable with no obvious signs of snow or ice. I crawled up the winding pass to the top, parked up, got my gear and made the 25 minute walk across the fell to the summit. As I was walking up I noticed that there seemed to be a decent amount of snow on the Fells to my right, so I was hopeful that the Scafell's would have a good covering. As I approached the summit the first tantalising view of the Scafells came into sight and I wasn't disappointed. The summits looked cloud free and the white snow glistened in the pre sunrise ambient light. It only got better as I reached the summit to find a fresh covering of snow on the ground....to say I was pleased was an understatement. The view from Hardknott is spectacular but even more so with a helping of snow. I made my way to a little tarn I discovered on my last trip and thought that would make a good starting image. The tarn was surrounded by snow and the partially frozen making for really interesting foreground to compliment the amazing backdrop. 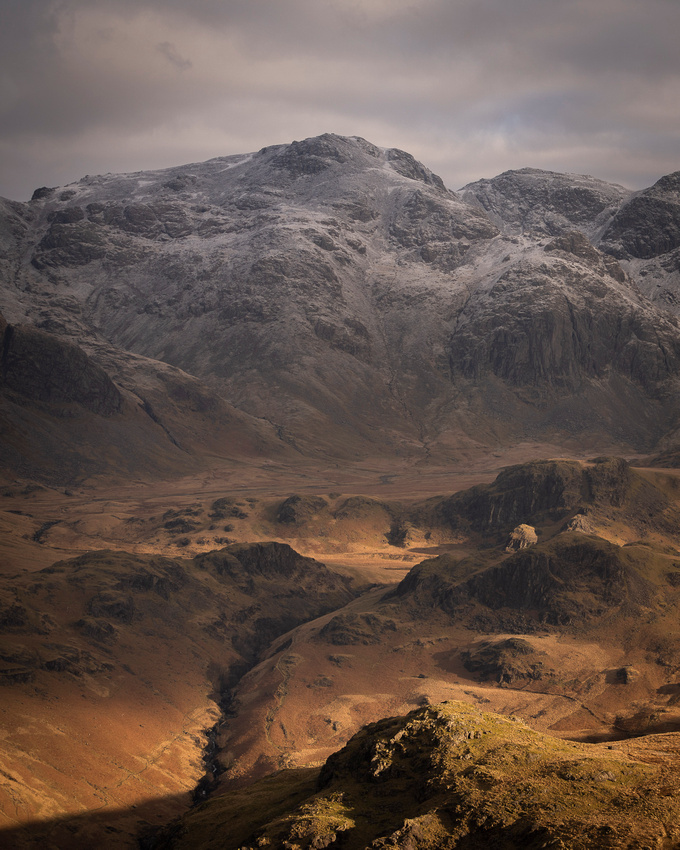 The pressure was off after grabbing my first image before the sun had even risen, so I had a brew and just waiting for some light. There was a large amount of cloud where the sun was due to rise and the gap on the horizon was getting smaller with the thickening cloud, so I knew that I wouldn't get much light on my scene straight away. I had a wander on to the summit to gain some altitude to see what the sun was doing. It was at this point the sun started to get above the cloud and creep above Wrynose Fell, so I grabbed my camera and took a few shots of the sun rising over Wrynose Pass, it looked wonderful with a splash of light and wonderful mood and colour in the sky. Shot number two in the bag, this was going better than expected. The sun then disappeared into the cloud and would that be it for the sun, it certainly looked like it. A quick check of the weather confirmed my suspicions and it looked like I wouldn't get any sun for a good few hours at best. However I was pleased this far and anything else would be a bonus, so I decided to wait it out for an hour or so and see what would unfold. A round an hour and some very frozen hands and feet later, splashes of light started to develop, the cloud was on the move and the sun was on the way. This called for around half an hour of mayhem as I moved locations and compositions to suit the changing light. It was a rush but absolutely glorious and a pleasure to be out. 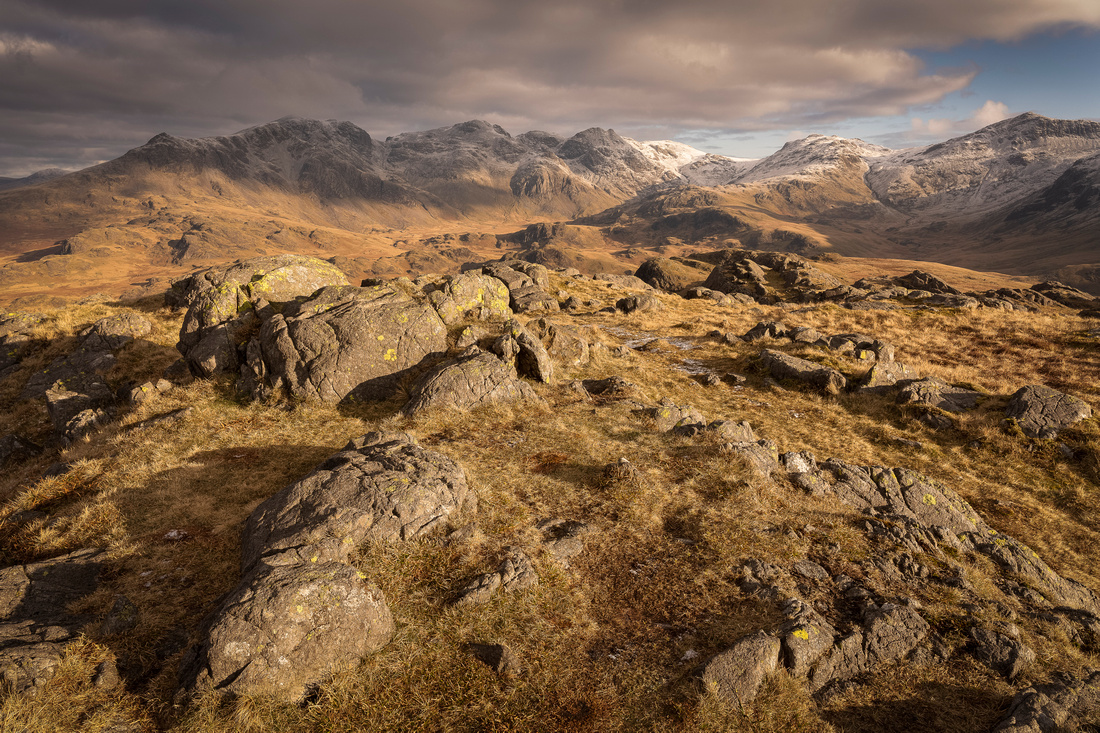 Around 8.30am I decided to call it a day having had the best of the conditions and feeling really rather cold. I was on a complete high with a feeling I've not had for a good few months while out with my camera. It's days like this that drag me out of bed at ridiculous hours, force me to climb up hills in the dark and gives me the determination to stand around waiting for that one moment of light. When it all falls into place there is no better feeling and sets me up nicely for the weekend. It's very fine margins in photography, having one good productive trip out with the camera makes all the difference. Ok it's not going to make or break a season by any means, but it does make all the failed attempts and disappointment of missing conditions easier to take. This is probably more to do with me than anything else, I'm sure most people would look at my winter images and wonder what I'm complaining about. Thats just how we are designed as photographers and we are never satisfied with our lot. I'm definitely happier after this shoot but if Mother Nature wants to cram in a little bit more snow this weekend I wouldn't complain.