Ahh back in lockdown again...in fact for the third time in a year. I don't know about you but this time it really does seem alot harder and I have certainly felt more down in the dumps than the first major lockdown last March. I'm not sure if it just a cumulative effect, a building of momentum over time or if there are other factors at work. Either way, at three weeks in I'm really starting to miss the great outdoors and getting out with my camera more so than ever before. I can certainly, in part, attribute this to the fantastic weather conditions we have had over the last few weeks, with some gorgeous winter snow, which sadly I've had to observe sat at home. The fact I cant make the short and lets be honest...it is short, trip into the Lakes makes it all the more difficult. Ok, it is the right thing to do in my mind, but that doesn't make it any easier. However, I really can't justify making the non essential trip out to take pretty pictures......especially when the NHS and Mountain rescue services are under unpresidented strain. It simply doesn't feel right. So considering all this, my photography time has been greatly reduced and this has had an effect on my mood of late. However, luck was definitely on my side this weekend and I was given a superb gift from nature and boy oh boy it was much needed and very very welcome.

Snow, Mist and Trees - The morning mists really did add another dimension to snow and trees: 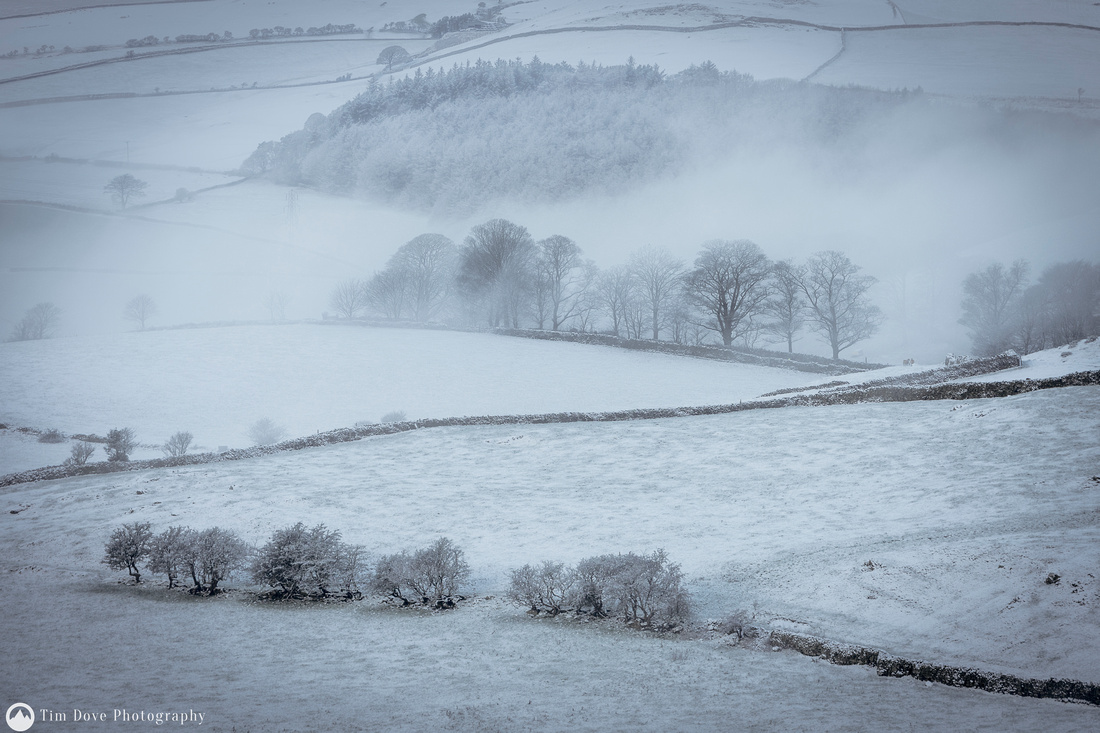 We don't tend to get a lot of snow down my neck of the woods in South Cumbria. It's funny, as you can drive 10-15 minutes up the road and get tonnes of snow, but where i live it is very seldom we get any. So you can imagine my delight when I awoke on Saturday morning to the most wonderful sight.....a lovely dollop of fresh SNOW!! I was all a fluster, I was so excited. I got my gear packed up as quickly as I could, had a mouth burning speedy brew and forced some toast down and off I tramped on foot from home up the local hill. In around 15 minutes I was on top of the hill and in absolute winter heaven. To make it even more unbelievable, not only did we have snow but also the mist was rolling in and out and it looked wonderful. It truly was a gift, a respite from the ground hog day of lockdown. I felt like a kid at Christmas but I didn't really know where to start, I was feeling the pressure and was a little over whelmed as there was so much going on. I certainly started to get the 'photography fear' that I wouldn't be able to take advantage of these amazing conditions which don't come around often. After giving myself a talking to, calmed down a little and relaxed, I set to work.

I had a rough plan now and I had a couple of shots that I really wanted to capture, conditions dependant, so if I could get either of these I would be happy. It didn't take too long for me to get shot one in the bag. I shot these trees back in the first lockdown and I really liked the diagonals that help move you through the scene. I really wanted to capture this but with the mist and snow, which would add a nice bit of contrast to the image. Well the mist rolled in and surrounded the trees and softened the background and it looked fantastic. With shot one in the bag I really felt the pressure was off and I was in my absolute element as I moved from location to location trying to catch the fleeting moments which the rapidly changing weather presented me with. I decided to ditch the tripod and was shooting handheld, so I could react quickly to these changing conditions and move around with total freedom and open up my creativity. I headed off the main hill and started to explore the hills behind to see what else I could find. Shot number two was taking advantage of the changing mists again. I've photographed the small out crop of trees that sits on one of the hills across the otherside of the estuary before and they looked really nice just poking out from the mists, with a frozen landscape below. It had a wonderful monochrome look and feel to it and the mist really simplified the scene.

Weather beaten - The shot I really wanted to get, this fantastic set of trees in a snow shower.

The main image I really wanted, was a lovely group of bent and twisted trees which sit on the hillside. The vision I had was them in heavy snowfall and white out conditions. While I was on top of the hill, it started to snow and the weather was closing in a little, so I made a dash for it down to the trees, to hopefully grab my shot. Luckily I managed to catch the tail end of the snow on the trees, not as much as I would have liked but I was really pleased with the image and it was, near enough, what I have envisaged. At this point I was really satisfied with what I'd captured and anything else would just be a bonus. I probably spent another few hours strolling around the hill as the great conditions didn't seem to be letting up. I probably took around 120 images in total, ok alot were utter duffers but I definitely bagged a few I'm really very pleased with. However all good things must come to an end and eventually hunger and lack of batteries got the better of me and I decided to head home for a bacon butty and a brew. The walk back was lovely, as there were lots of folk out enjoying the snow responsibly and lots of happy people and that was something to savour indeed.

Coniston Old Man View - The impressive Coniston Fells with a splash of morning light warming them. 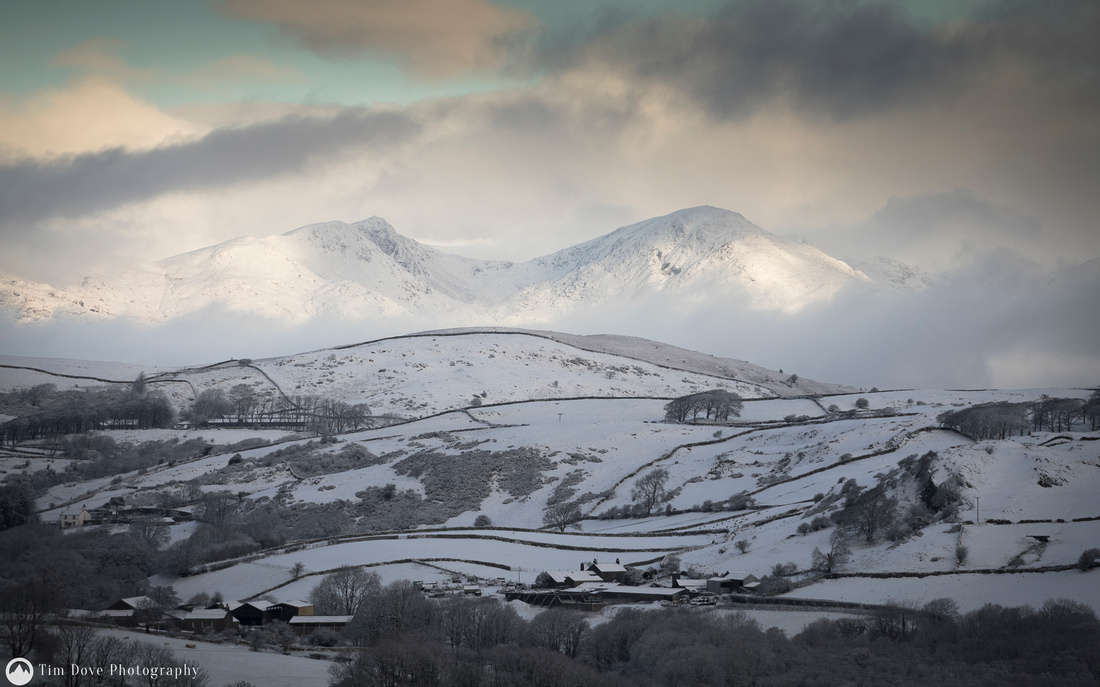 What a wonderful morning of photography and one which gave me such a monumental lift. For the first time in a long time I felt happy and continent and had no worries about covid and other enormous pressures. The weekend felt like a weekend, that I had achieved a great deal and had a huge sense of satisfaction. Dare I say it but for those short few hours, I felt normal......I felt like me and it was wonderful. I want more of this, I want to feel this way again and I know I will. This has given me enough fuel in the tank to keep moving, keep positive and focus on the good that will be once more. Sometimes we don't need a lot to give that boost but the snow really has brought so much to so many people. Nature really did intervene and give everybody a bit of respite from the hardship of the latest lockdown. When hope is low, she picked us up and set us back on the road again. I for one am very greatful of this and can't thank her enough.

Estuary Inversion - The mist kept getting better and better as the morning progressed. 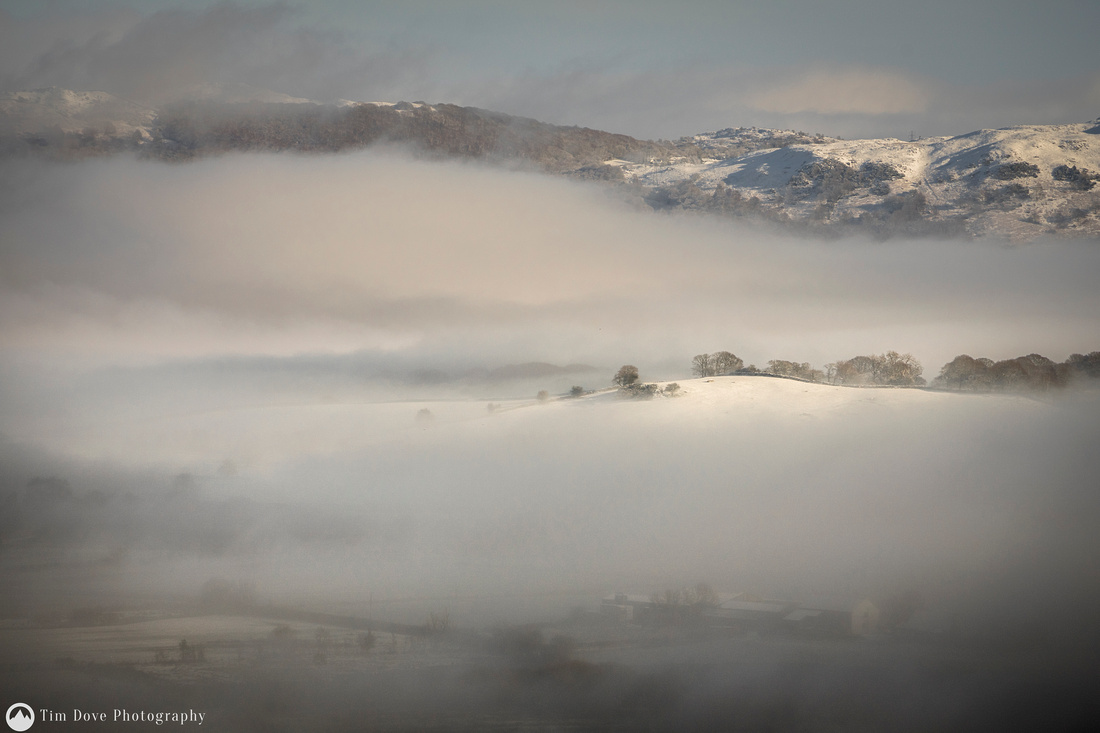 Janet Guerin-Young(non-registered)
Great blog Tim, really cheered me up. The photos are all lovely too.hope you are all well
Pam(non-registered)
Love the image of the bent and twisted trees Tim. Beautiful. It was indeed a good day to be out!
No comments posted.
Loading...
Subscribe
RSS
Recent Posts
Shooting Outside of Golden Hour Winters Final Hoorah? The Importance of understanding Light and How I use it in my photography NEWS: January Sale - 20% off ALL Prints Tim Dove Photography - Business Review 2021 My Favourite 10 Images of 2021 The First Snow of the Winter Arrives The Day that Saved Autumn NEWS: 12% OFF ALL PRINTS DURING OCTOBER Landscape Photography can be so FRUSTRATING!!!!!
Keywords
lake district photography Landscape prints Lake District Photography Lake District Snow mounted Autumn
Archive
January February March April May June July August September October November December
© Tim Dove Photography - Lake District Photography
User Agreement
Cancel
Continue