The First Snow of the Winter Arrives

It was rather a bitter sweet feeling as we were gifted the first snow of the winter in the Lake District last weekend. The usual excitement was somewhat suppressed as Storm Arwen wreaked havoc through the National Park. It's probably been the worst stormy conditions i've experienced for a number of years and some poor folk are still without power a week on from the storm. I was aware the storm was coming and would peak on Friday night, but I wasn't anticipating the chaos it would leave in its wake. On Saturday morning the full extent of the damage was revealed, with trees down blocking roads, power lines down, damage to buildings and sadly even loss of life as well. The winds were still high on Saturday and I decided that it was far too risky to venture out, however Sunday looked calmer and hopefully by this time the ability to get about might be a little easier. I was still a little apprehensive about heading out, but I decided to play it safe and stick to the more main routes. What I wasn't expecting was the forecast of yet more snow for Sunday as I checked the weather apps before I left the house. It still looked calm after a quick glance out of the window, so I decided to take the chance and make the 30 minute drive just North of Coniston. I'm pretty sensible these days and know when to turn back.....must be old age. 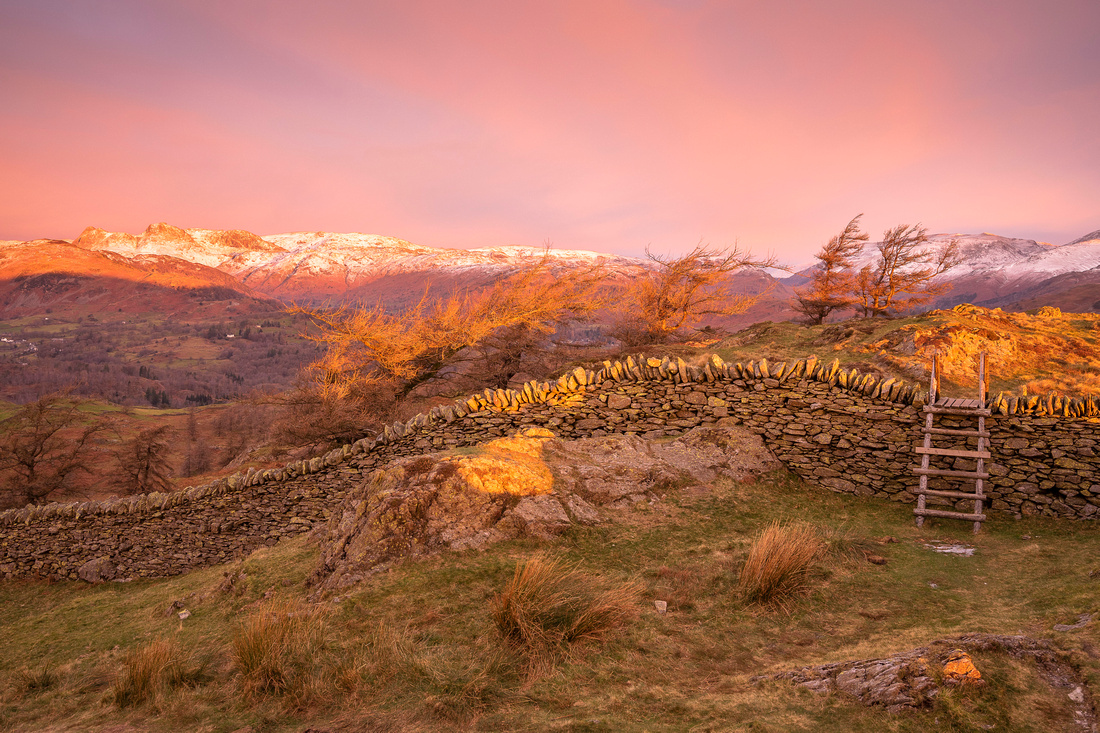 On my drive to Coniston it wasn't long before I was witnessing the full devastation first hand. In total I passed 8 trees down which where partially blocking the roads, I doubt I would have got through on Saturday. The roads were full of general debris and it was slow going, but careful driving was the name of the game. I arrived a good hour and a half before sunrise and made the hike up to Black Fell. It's a wonderful vantage point with 360 degree views. As I made my ascent I could see the tops of the fells glowing with a fresh covering of snow, at this point my excitement levels had started to return. Once at the top, I stood and took in the views, the ambient light was enough to show the fells in all there winter glory, there was great clarity in the air and there was not a breath of wind...the perfect crisp winters morning. What a difference a day makes, from up high you would never have know the devastation which lay below. After a few minutes reflection I started to work out a composition. At this point I was joined by three other photographers who I know well and it was good to catch up with them. While good to chat, it rather inhibited my ability to get set up and work on my composition. With moments until sunrise, I thought it best to get set up and wait for the light. It was rather crowded on the summit with two other photographers taking the same image and as a result I couldn't really get the angle I wanted. So after taking a quick shot, which I wasn't overly happy with, I hopped of the summit and looked for something different.

The Wall: My first image of the lovely stonewall which I wanted to use a leading line to the awesome light on the snow capped fells: 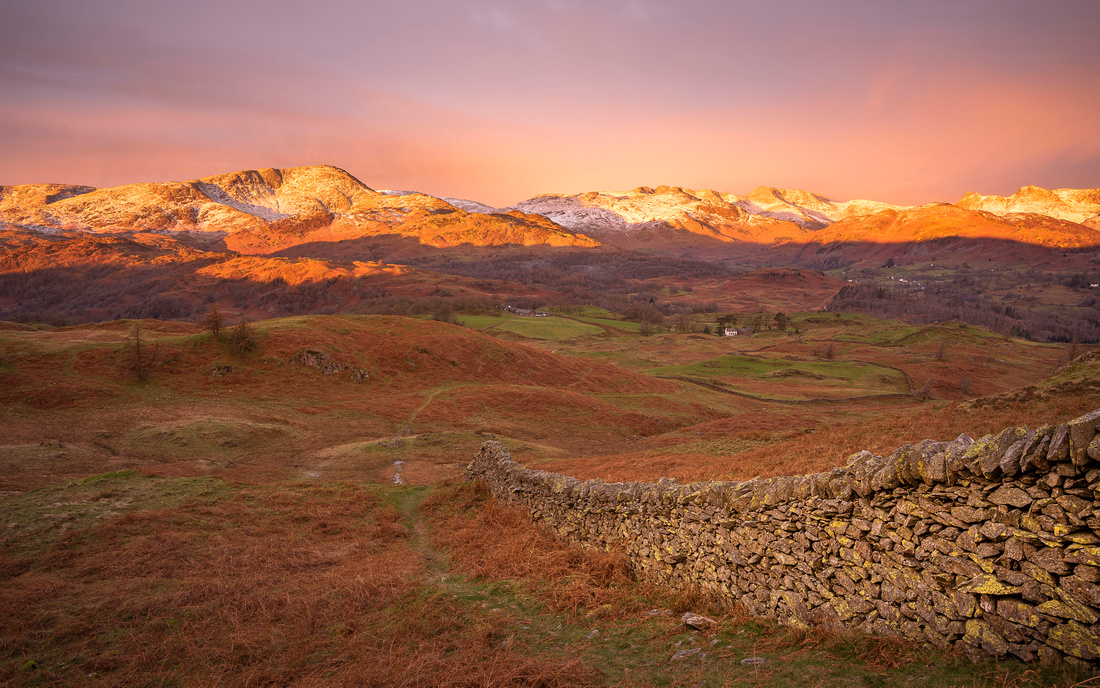 The Wall II: My second pass at the wall. I decided on a tighter crop and got a little closer to the wall...making it and Wetherlam the main features in my image. 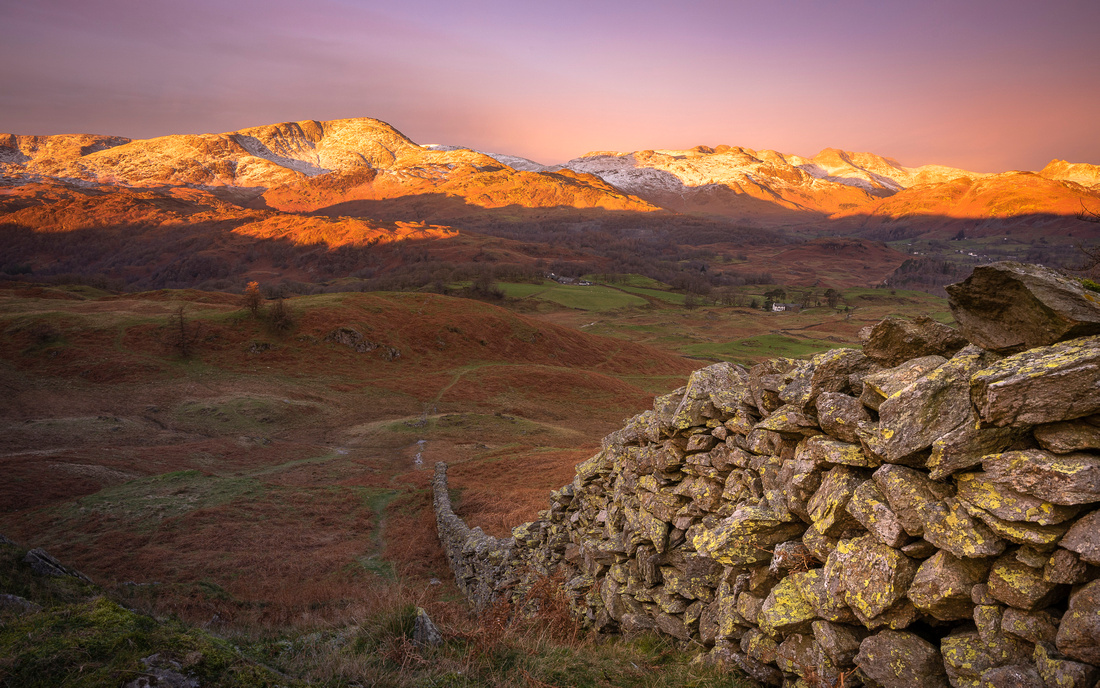 The light was coming thick and fast now and it was absolutely gorgeous with oranges, pinks and purples in the sky and intense light warming the fells. I was starting to panic a little as I didn't have a shot in mind and I really didn't want to miss the light. I decided to use this old dry stone wall which leads off down into the valley and though it would make a good bit of foreground and lead into the image. I tried two different variations with one being closer to the wall than the other, I'm not sure which is my favourite. After this I noticed that there was more light looking North towards Grasmere, so I picked up my tripod and made the dash across the fell to a better vantage point. It was at this point that I noticed that I wouldn't have light for much longer with the sun about to move up into a thick bank of cloud that wasn't going to move anytime soon and effectively end today's photographic proceedings. I had just enough time to pop the tripod down and fire off a quick panoramic image looking to the North with the last of the glorious intense light illuminating the scene. In the end we got 10 minutes of unbelievable light and that was all. So I heading back and chatted to the guys for another half an hour, had a cuppa and then decided to head home. The forecasted snow was now working its way across from the west and was slowly enveloping the fells in its way. This was my queue to leave and get home, so I slowly ambled down the fell, I was a little disappointed I didn't make more of the conditions and that they didn't last a little longer. However you have to make the most of what you are presented with. It was also a great reminder to sort your composition out before gassing too much to other photographers.

here(non-registered)
Simply a befuddled individual will block the significance from guaranteeing about the Life Centered Career Education. This latest strategy for preparing has made me its immense fan since it helps an understudy with smooth mental block to change into the basic occupant of society.
No comments posted.
Loading...
Subscribe
RSS
Recent Posts
The Importance of understanding Light and How I use it in my photography NEWS: January Sale - 20% off ALL Prints Tim Dove Photography - Business Review 2021 My Favourite 10 Images of 2021 The First Snow of the Winter Arrives The Day that Saved Autumn NEWS: 12% OFF ALL PRINTS DURING OCTOBER Landscape Photography can be so FRUSTRATING!!!!! NEWS: A4 and A3 Mounted Prints now Available in the Shop Rediscovering my Mojo
Keywords
Lake District Photography Landscape prints Lake District Photography Lake District mounted Autumn borrowdale
Archive
January February March April May June July August September October November December
© Tim Dove Photography - Lake District Photography
User Agreement
Cancel
Continue