With a successful and very moist scouting session the previous week, I once again found myself in Borrowdale for the day. The colours had ramped up another notch and the change in one week was noticeable. The conditions, on paper or app, looked very promising with a mixture of sunshine and cloud. Luckily the heavy down pours didn't look like they were going to materialise, which was good having only just dried on from the previous weeks exploits. The plan was very much as per the week before with me starting the day on Kings How, before coming down to the woodlands and then around the Castle Crag view point for sunset. Another early start and the short but steep ascent of Kings How. Now I've been up Kings How around 6 times and everytime I do I seem to get a little lost and find another way up. The way I went up this time certainly wasn't my favourite and wouldn't be attempt again.....simply put I think I got a wee bit lost. Anyway after some scrabbling, slipping and swearing I finally reached the summit. Its a fantastic little summit as you have view towards Keswick and Borrowdale, so if your undecided on which direction you want to shoot, stand on the summit and wait to see what looks the most promising. That was my plan, the shot I really wanted was the view towards Keswick with the bank of birch trees lit by the morning sun. Sadly this shot wasn't on as a thick layer of low clould shrouded Skiddaw and the shot doesn't work in these conditions. So I made my way down to the Borrowdale side of the fell.

The first shot I composed for. Really like this scene, but I think I needed a little more light to make the most of it. 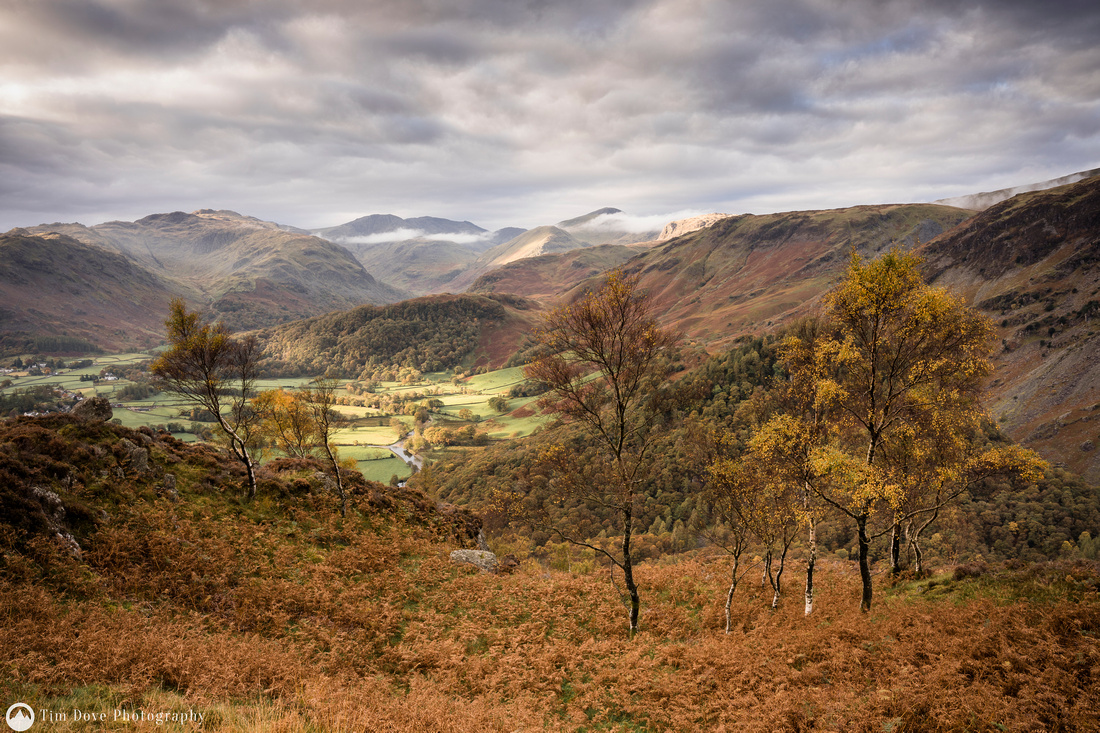 As is often the case with Landscape photography the sunrise didn't materialise and it was a waiting game to see if any light would break the thickening cloud. Around an hour and a half after sunrise, slowly the light started to break. In these types of conditions you can often get some lovely light which highlights certain areas of the landscape and this was definitely the case here. A beautiful shaft of light pierced the cloud and lit the Borrowdale Valley floor. It was a gorgeous sight and reward for my patience. This was probably the best of the light I had, after another mooch about I decided to head over to the Keswick side of the fell to see if the cloud had shifted. Sadly the cloud was still to heavy, so I decided to make my way off the fell and have an explore of the woods. I was heading down the path from Kings How and I came across a little woodland scene which rather caught me eye. One thing I've learnt this year is that if something catches your eye it has done for a reason. So I got my camera out and explored the scene and see if it could be worked into a shot. Sometimes scenes, no matter how beautiful they look to the eye, just don't translate to the camera. However it is always worth taking the shot, as you never know. I had a play around looking at different angles and took a few frames. In the end I'm glad I persevered with the images, as its turned out to be a pleasant woodland image and I lost nothing by taking the image. I was getting rather hungry by this point so I headed back to the car for a spot of lunch.

One of the more successful woodland images from the Afternoon session: 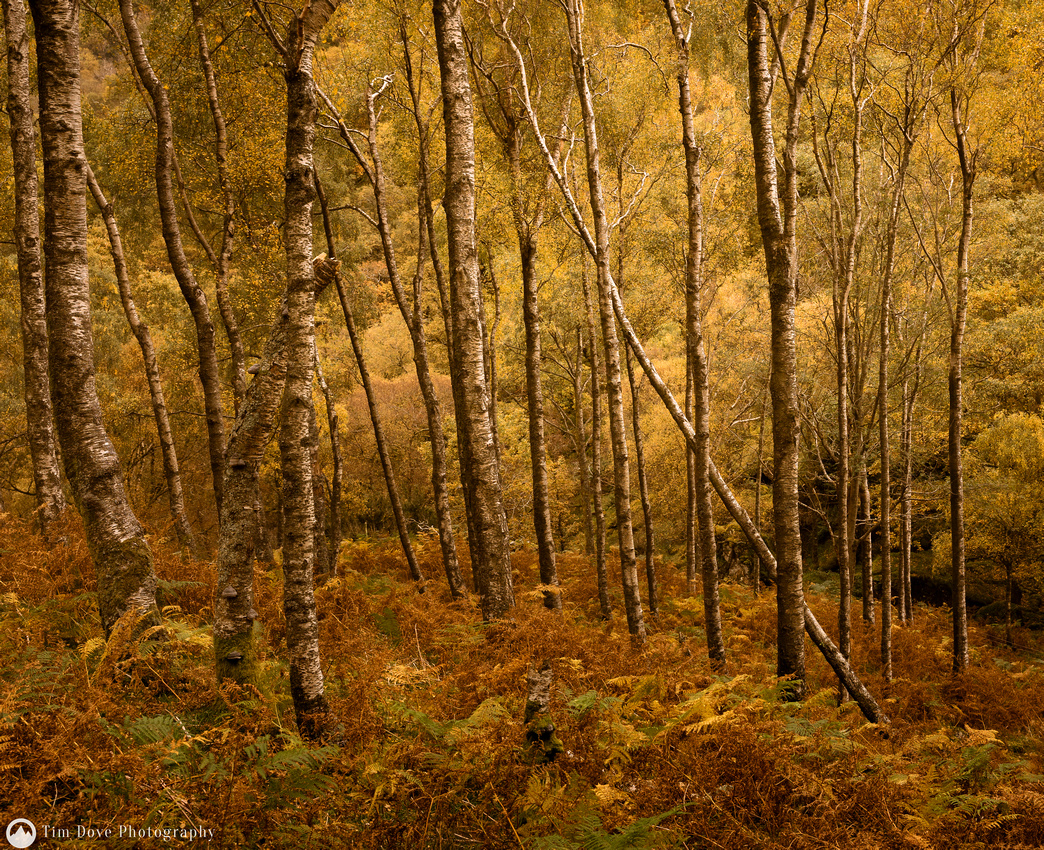 The afternoon session was a real mixed bag and one that wasn't very succesful in terms of woodland photography. I tried numberous compositions and locations but nothing really worked as I'd hoped.......but this is a part of landscape photography. After the woodlands I decided to have a walk across to the open area of land again, there is a small fell...more of a hillock, which is unnamed on OS maps but has a lovely view back towards the woods and Castle Crag. I thought it was a good idea to have a look to see what a higher vantage point would be like. After a very short climb I reached the top and I wasn't disappointed with the views. Its only a small summit with a few birch trees on the top and a small rocky out crop. Once again the view towards Skiddaw was subject to heavy cloud, so I knew this wouldn't work. I turned back towards Borrowdale to witness what looked like some amazing light developing as a passing shower swept through the valley....I quickly got set up and all of a sudden the light broke and hit the woodland infront of Castle Crag. It looked absolutely awesome and contrasted so well with the colours and also the mood. I just fired off as many images I as could. No time for filters, so I had to bracket my exposures because the light was a little on the hrsh side as I shooting towards it. A few moments later it had all gone. I was so pleased I was were I was and able to capture a wonderful moment and probably for me the best light of the day. 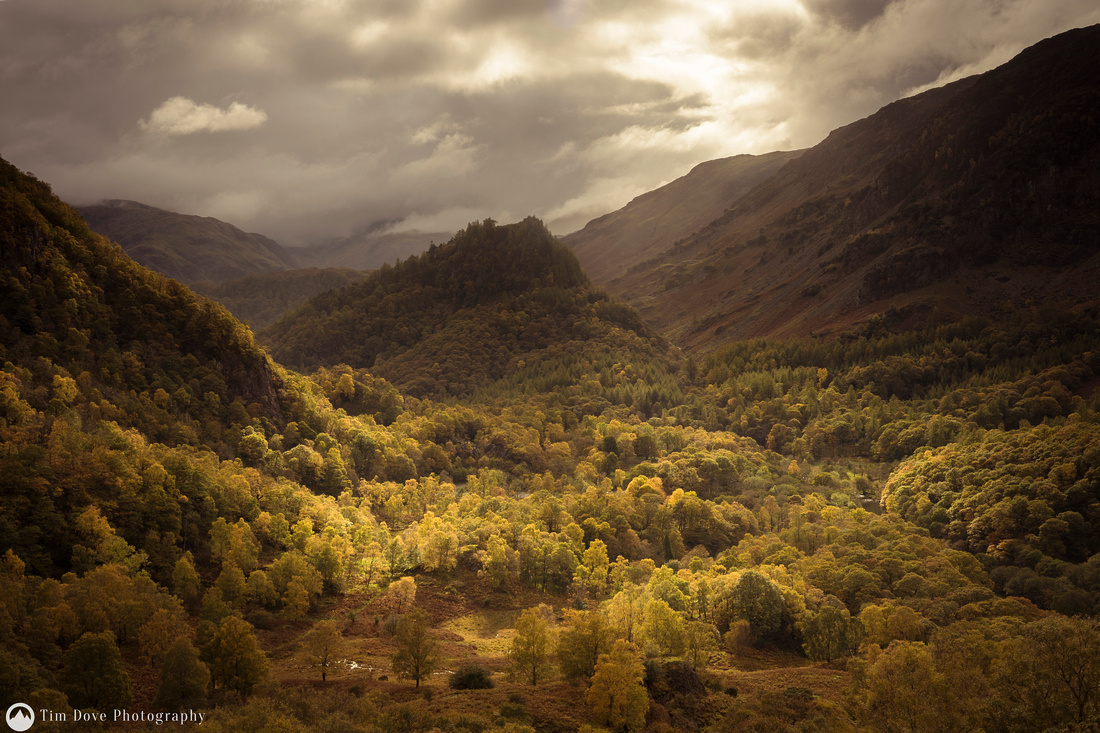 For sunset I had decided to try my luck again on Kings How, but by this time I was a little on the tired side and wasn't sure I could face the hike up again with only the slight hope of anymore light and the cloud clearing from Skiddaw. As a compromise, I decided to hike half way up to a decent vantage point and asses the situation. Well I was less than impressed with what I saw on arrival and decided to head back down. I reached the bottom when I noticed another photographer, who was photographing the gate I needed to walk through. As I go closer, I recognised his face as James Bell, who is a well renown professional Lake District photographer. I follow him on social media and have had a few conversations with him before and is a photographer I greatly admire. So we got chatting and I spent the rest of the afternoon chatting to James and as a result completely missed a decent sunset. That really didn't matter as it was good to meet James and he was a throughly nice chap and really interesting to talk to. I think if I'm honest this was without doubt the highlight of the day and absolutely worth missing sunset for. All in all another enjoyable day out. I still wasn't completely happy with the images I got and I was still very much after the 'magic' autumnal shot. Hopefully I would manage to get back to Borrowdale one last time before the best of the colour departed, my fate was very much in the hands of the gods, as the weather wasn't looking amazing at this stage. I had everything crossed.