2020 what a year eh? Ok, its not been a vintage one and I think the quicker we can sweep it under the carpet, tuck it into that bottom draw or just toss it in the bin the better. I'm not going to dwell on it too much, but aside the negatives of 2020, there has been many positives mixed inbetween the general doom and gloom. Photography, on a whole, has been rather enjoyable as I've had more time to focus on it. As a result of this, I believe I've produced some of my best work.....when restrictions have allowed it. I've also met some lovely people along the way (from a socal distance of course) and ones, hopefully I will remain in contact with. So its not all been bad. However, we now find ourselves in another lockdown to start 2021, which will be a blow to many, but yet again it is necessary in my opinion. Hopefully this will be the last one and once the vaccine is rolled out, we can get back to some normality....or whatever normal would be. So I will be on a six week break from getting out into the Lakes with my camera, but that is fine and I cant really justify the risks. Plus I'll be yet again busy with home schooling (oh joy) and working on my photography business, which despite covid was probably my most successful year to date and I'm very keen to build on this. I'll have to get back to you on whether 2021 will be better but in the meantime I'm going to look at my last trip out of 2020 and getting myself in on some wonderful snowy action.

The Scafell Massif from the Walna Scar cross roads: The ScafellsLooking towards the Scafell massif from the side of a snowy Buck Pike, Coniston. A fablous winter wander over Christmas 2020.

So 2020 left off with rather a lot of snow and it has been lovely to see the fells with their winter coats on. Winter last year was absolutely awful and frankly it would be rude not to have a trip out in such conditions, as they don't come around often. I decided to take a hike up Dow Crag, as its fairly close to home and I was trying to stay local and not travel far. The fell makes up part of the Coniston range and is one of my personal favourites, as it has beautiful views and is a little less busier than its more famous neighbour the Old Man of Coniston. It was a sunny day, with plenty of blue skies, but that didn't matter too much, as it was just damn good to be out in these wonderful conditions. Dow Crag is a reasonable hike and shouldn't be under estimated, as with all fell walking in the winter months, more on this later. I started my walk from Torver and made the hike up through quarries to the Walna Scar road, this is a rough road/track which links Coniston to the Duddon Valley. The road leads you up to a plateau between Buck Pike and Brown Pike, from here you can either decend into the Duddon Valley, turn left and head across to Brown Pike and White Maiden or right to make the ascent of Buck Pike and Dow Crag. I arrived at the plateau after around an hours hike/slide and was stopped in my tracks by the first sight of the Scafells. They looked amazing covered in snow and low cloud clinging to the summits. I naturally had to get the camera out and take a few images as the light and cloud changed to alter the mood of the scene.

Summit View - Looking up to the summit of Dow Crag and the Scafell Massif: 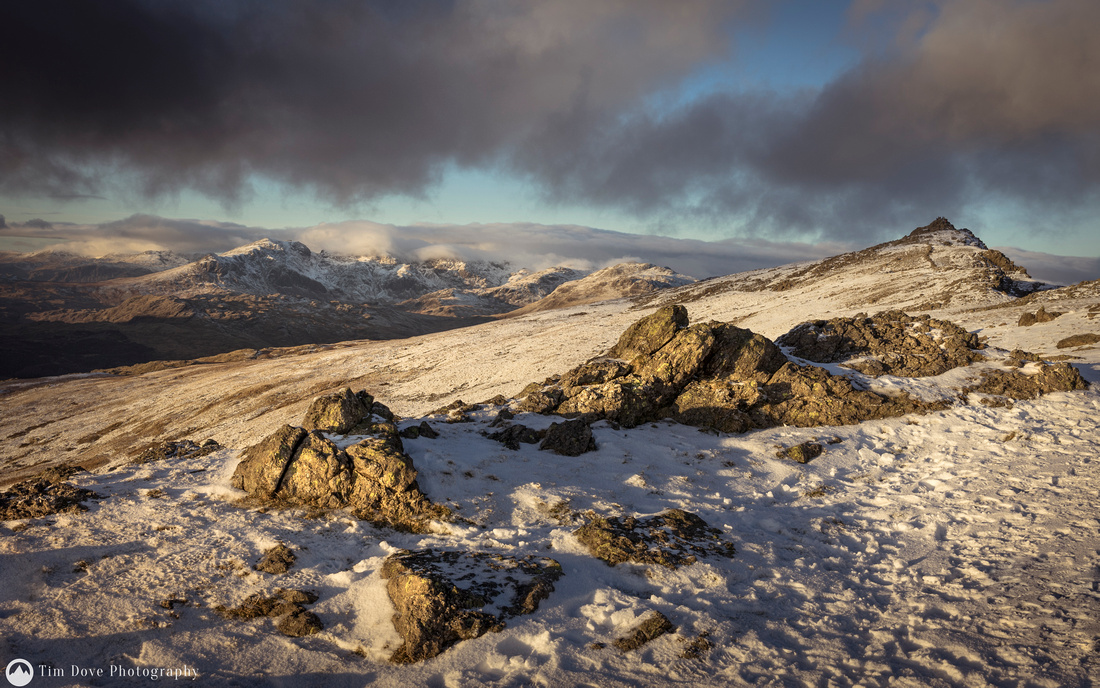 Dow Crag Winter Summit ViewLooking towards the summit of Dow Crag and the Scafell Massif on a snowy winter hike.

I then spent some time exploring the slopes of both Buck Pike and Dow Crag looking for a golden hour/sunset shot. I have to admit, that I tried a few different composions, but wasn't finding anything overly exciting. The problem I had was the summit was fairly rocky and a little chaotic and this made finding a simplistic composition difficult. After frolicing around in the snow for a good hour or so, I eventually came across a scene I thought had potential. It was on the final ascent before the summit and I found a nice collection of rocks, which kind of mirrored the mountains in the distance and made for good foreground interest. I got set up and played around with angles and waited for the best of the light. Luckily and to add further interest to the scene, some rather nice looking cloud had rolled in and provided a bit of contrast with the snow. This really helped to balance the image and give it greater impact and depth, which would have been lost without the cloud. Having been on the fell for a good few hours and with the wind picking up, I was starting to get very cold and my hands where like blocks of ice. Winter photography can be pretty brutal at times and I'm so glad I had my many layers on to keep the chill off. Its so important to be prepared in these conditions. Just as we approached golden hour the light was looking nice and I grabbed my shot with the last of the nice cloud before it blew over and left blue skies behind. At the time of taking I wasn't sure the shot was going to work, but you never really know until you get it home on the computer but I'm pleased to say I'm happy with how this turned out.

Moonrise over the Old Man - My final sunset of 2020 a lovely way to end a turbulant year: 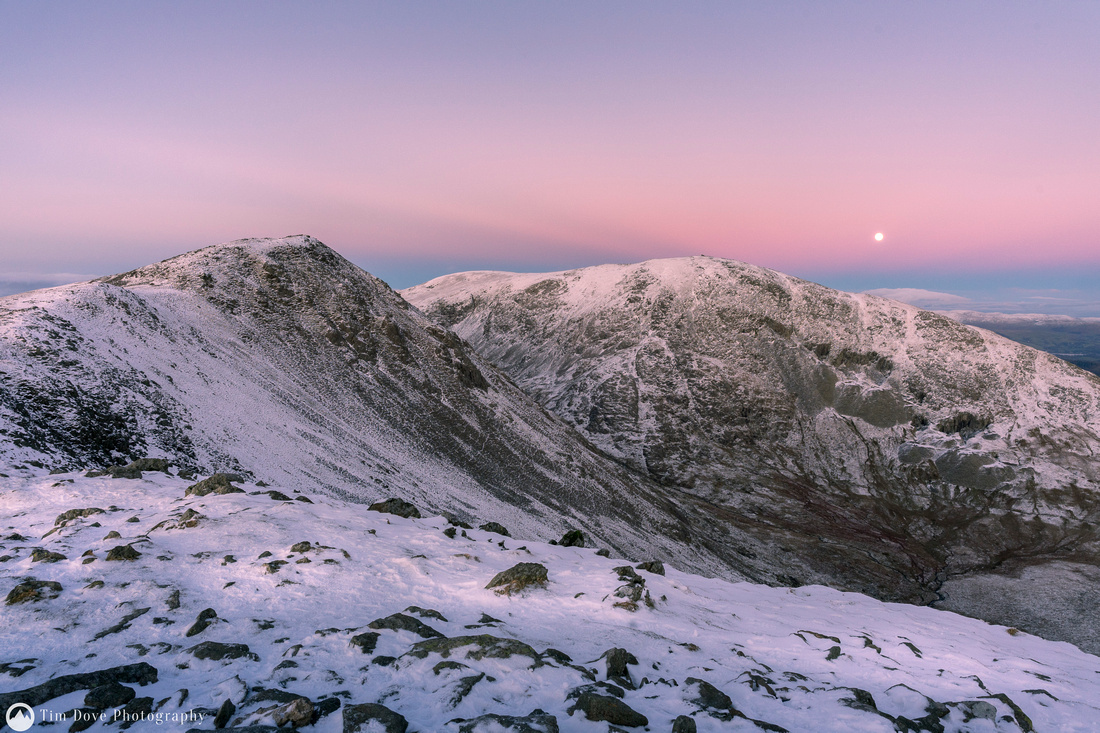 The remainder of golden hour was a little bit dull as the skies had cleared but low cloud had covered the Scafells and it all looked nice enough but didn't really translate on camera. Sometimes we just have to except that just because a scene looks good to the eye doesn't mean it will work on camera. So I just stopped, had a brew and watched the sun sink below the icy horizon. It was wonderful to watch and a pleasure to be out in. I then packed up my gear and decided to head back as it would be a good hour hike in the dark to the car. When I reached Buck Pike I had a glance behind me and noticed that the moon was rising over the Old Man and it looked amazing. So I decided to set up and try and get a shot. It was such a clear crisp night by now and the clarity was amazing. The moon was rising over the fells and there was a sublime belt of Venus (earths shadow), anti crepuscular rays and gorgeous pink and blue hues in the sky. It was probably one of the most awesome sights I've seen on a fell and it was quiet and peacful to boot. A wonderful way to end a great hike. There was a stark reminder on the way down that the fells must be treated with respect and you need to be fully prepared at all times, with a full scale mountain rescue call out including ten members of the MRT and a helicopter for somebody who had attempted to climb a gully on Dow Crag with out the proper equipment and got stuck. Luckily knowbody was injured on this occassion but vital resources were used and at this moment in time these resources could have be utilised better. This is one of the reasons that I will be staying home for the time being. Stay safe all and look after each other.